Sirenians Of The World

Members of the extant order Sirenia are found in aquatic habitats throughout the tropics and subtropics. Sirenians are the only completely aquatic mammals that are herbivores. Because of their herbivorous nature, all sirenians are found in relatively shallow waters where sunlight can penetrate and stimulate plant growth. 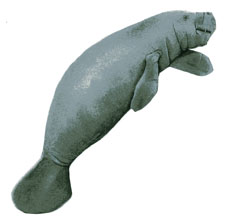 Amazonian manatees are found in the waters of the Amazon River and its tributaries in South America. The smallest member of the family Trichechidae, the Amazonian manatee has smooth skin and no nails on its flippers and feeds on freshwater vegetation. 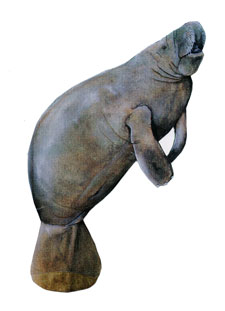 The African manatee is very similar in size and appearance to the West Indian manatee and lives in similar habitat. African manatees are found in African coastal areas, but little is known about this species because they have not been widely studied.

Dugongs are found in the Indo-Pacific region of the world. They have smooth skin and a notched tail fluke. They feed on seagrasses and are hunted for food by humans. Dugongs have tusks, but these tusks characteristically erupt through the gums only in males and normally remain unerupted in female dugongs.

At one time, the Steller’s sea cow was found in the cold waters of the Bering Sea, but it was hunted to extinction within 27 years of its discovery in 1741. The largest sirenian on record, the Steller’s sea cow grew up to nine meters (30 feet) in length and weighed around four metric tons (approximately 4.4 tons or 8,818 pounds).

Please Note: Graphics not to scale. All images © Save the Manatee Club.

In ancient mythology, “siren” was a term used for monsters or sea nymphs who lured sailors and their ships to treacherous rocks and shipwreck with mesmerizing songs. Throughout history, sailors sometimes thought they were seeing mermaids when they were probably seeing manatees or dugongs. With a little imagination, manatees have an uncanny resemblance to human form that could only increase after long months at sea. In fact, manatees and dugongs may have helped to perpetuate the myth of mermaids.