A female manatee first identified in 2010, she has had four calves

Moo Shoo is a female manatee who visits Blue Spring State Park in the winter, and she was added to Save the Manatee Club’s Adopt-A-Manatee® program in 2018. Moo Shoo was first identified in 2010. Wayne Hartley, Save the Manatee Club’s Manatee Specialist, says it’s possible she was visiting the park even earlier, as there were 19 calves who could not be identified in the 2009 – 2010 winter season, and Moo Shoo may have been one of them. Researchers identify manatees by their scar patterns as they study and record their behaviors.

Unfortunately, by the next manatee season, Moo Shoo soon had some scars. She had a superficial scrape on the left edge of her tail and three prop slashes with a skeg slash in the middle of her back from a boat hit. She also had white marking along the left edge of her tail. “With such a young manatee, I was sure these would heal to invisibility,” said Wayne. “Initially she was known as “S5/10,” and that meant she was a manatee I thought I would only be able to follow for one season, and I would not know her if she came back the next year.”

But by the next season, Moo Shoo came to Blue Spring with her white markings intact. Wayne was even able to discover a postage stamp-sized scar on her left lip. She then became “U14/11,” meaning she was marked well enough for him to possibly identify her in the future, and at the end of the season, she received the name “Moo Shoo,” and her Blue Spring number “BS668,” signifying that she is officially known as a manatee who visits the warm waters of Blue Spring State Park in the winter.

Since 2010, Moo Shoo has been recorded as making between 14 and 30 visits to Blue Spring during the winter season. She seems to like hanging out halfway up the spring run, as she is frequently observed there. “She also loves to nudge the research canoe and rub her belly on it,” says Wayne. During the 2013 – 2014 manatee season, Moo Shoo was discovered to be pregnant, and on November 4, 2014, she brought in a little boy calf that received the “baby” name Mandan. With a new calf to look after, Moo Shoo was recorded at Blue Spring 30 times that winter. She also spent most of her time far up the spring run. “She was not the most attentive of mothers as she was often far from her calf,” said Wayne. “She still wanted to do the ‘play with the canoe’ thing. I don’t think Moo Shoo wanted to be an adult yet!”

Since that time, Moo Shoo has continued to return to Blue Spring each winter. Mandan also came back with his mother as a yearling, but he does not have marks that will make him easy to identify in the future now that he is weaned and on his own. During the 2017 – 2018 manatee season, Moo Shoo brought another calf to the park, which would put her at a three-year birthing interval. And she seems to have matured a bit. Wayne reports that Moo Shoo was a much better mother with this calf and did not seem as interested in the research canoe as much. Moo Shoo also came in for the 2018 – 2019 season and made at least 20 visits to the park. In November 2019, Moo Shoo came into Blue Spring with her third calf and in November 2021 she brought in her fourth calf.

You can adopt Moo Shoo or other manatees!
Each person who adopts her will receive a full-color photo, biography, and adoption certificate, as well as a membership handbook and subscription to The Manatee Zone, a newsletter featuring updates on the adopted manatees when they are sighted, and Paddle Tales, Save the Manatee Club’s bi-monthly eNewsletter.
Adopt for Myself Adopt for Someone Else Educator Adoption
For more information or to view other manatees available for adoption, visit the Adopt-A-Manatee page, or call 1-800-432-JOIN (5646). 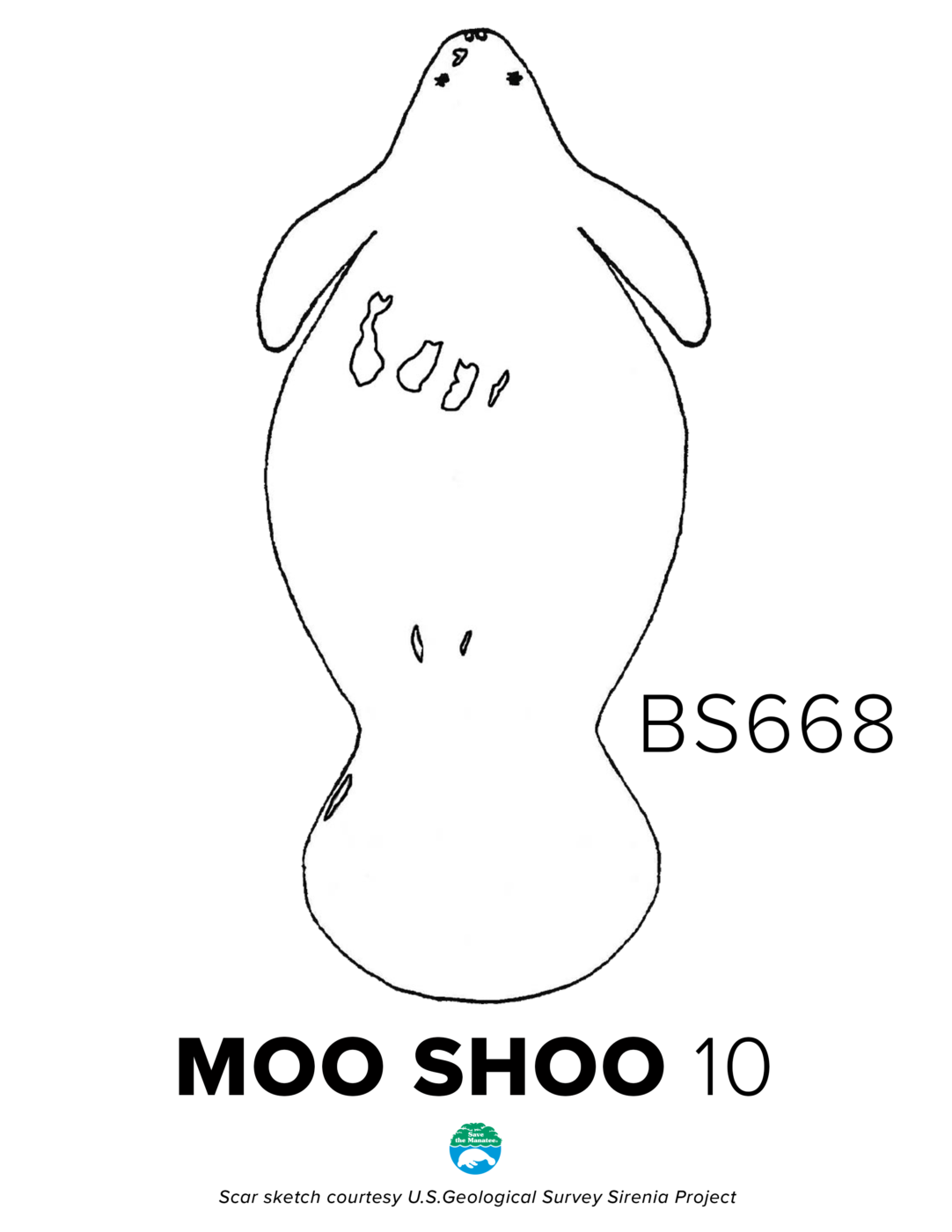 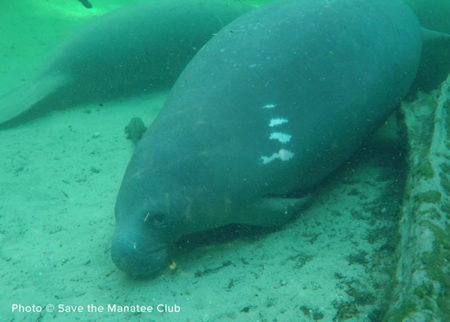 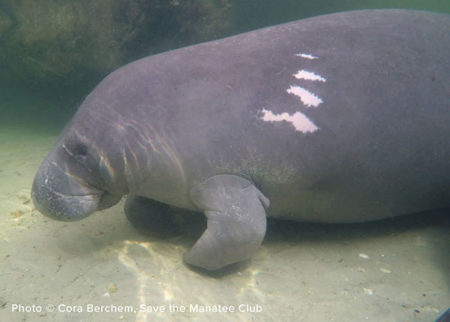 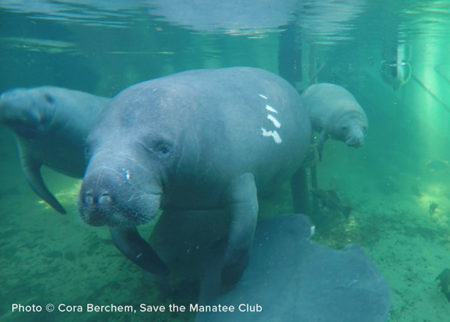 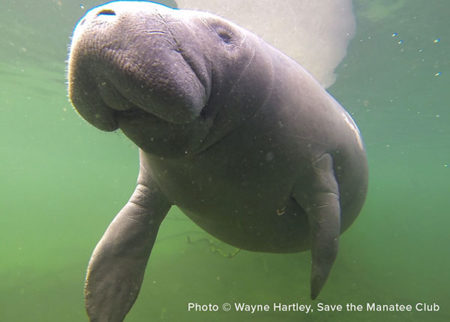 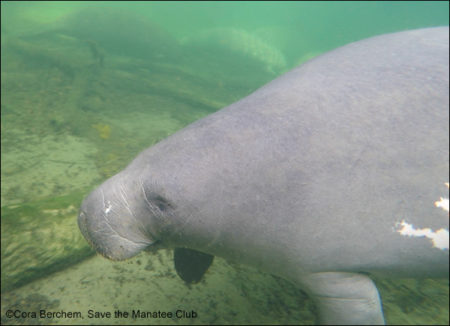 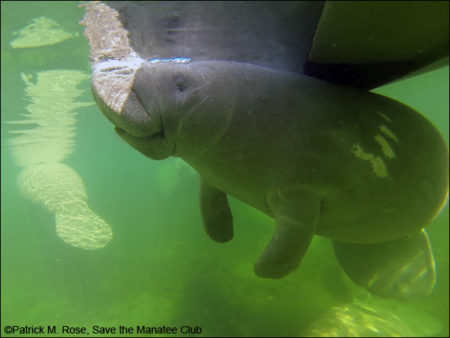 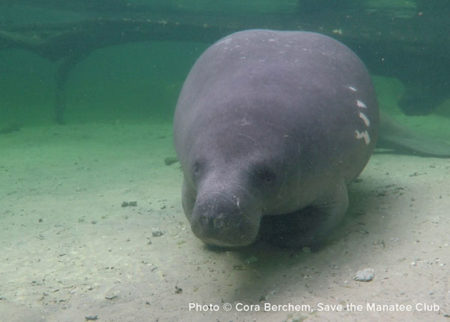 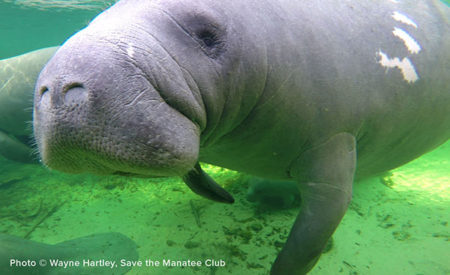 Watch A Video of Moo Shoo
Watch a compilation video of Moo Shoo from her visits to Blue Spring State Park as she hangs around the research canoe, investigates the camera, surfaces to breathe, and shows us how manatees can manipulate their prehensile upper lip, which can also be used to grasp vegetation. At :47 in the video, you can see Moo Shoo’s second calf from the 2017 – 2018 manatee season.
Visit Save the Manatee Club’s YouTube page for more videos.