HomeHow to HelpAdopt-A-Manatee®Meet a Manatee: Una

She has been rescued several times for monofilament line entanglement

Una is a winter visitor at Blue Spring State Park in Orange City, Florida. She has been rescued and treated for monofilament entanglement multiple times.

Una was initially rescued as an orphaned calf from the Ortega River near Jacksonville, Florida, in December 2003. She was taken to SeaWorld Orlando and released three years later with several other manatees at Blue Spring State Park in Orange City, Florida. By that time, Una had grown to over eight feet in length and was 980 pounds. To make sure she was adjusting to life in the wild, Una wore a tracking device, so her movements could be monitored.

Una is known to be pretty social. When she was being tracked, she was regularly seen feeding and hanging out with other manatees, and she was once recorded spending six days with fellow adoptee Rocket. She can also be a traveler! Ten months after she was released, Una traveled 130 miles from Blue Spring State Park to Jacksonville, Florida, where she was initially rescued. Because it was winter, and she showed signs of cold stress, Una was captured and released back at the warm waters of Blue Spring State Park.

After the Jacksonville incident, Una re-acclimated well to life in the wild. She was known to travel in the St. Johns River and continued to visit Blue Spring in the winter. She brought in her first calf for the 2010 – 2011 winter season and had another calf named Flower in 2013 (this is a “baby name” and not permanent until the calf has identifying scars). Then in November 2013, Una came into the park with fishing line entanglement on her right flipper. The next season, she came in with line entanglement on her left flipper. Unfortunately, plans for a capture were unsuccessful both years.

The following season, Una came in to Blue Spring with even more fishing line entanglement that connected both of her flippers. Luckily, the connecting line was able to be cut, but line on each flipper remained. A rescue was again considered until researchers noticed that she was pregnant. Finally, in November 2016, Una and her large calf were captured and transported to SeaWorld Orlando to have the embedded line removed. Una and the calf, named “Mr. Baby,” were released on December 12, 2017, at Blue Spring State Park. Mom and calf went their separate ways as Mr. Baby was weaned by this time. In November 2019, Una arrived at Blue Spring with her third calf.

During the 2019–2020 winter season, researchers noticed that Una had once again severely entangled in fishing line. One flipper seemed infected and had worsened to the point where it was not certain the calf could nurse properly. A rescue team from Florida Fish and Wildlife Conservation Commission, SeaWorld Orlando, Clearwater Marine Aquarium Research Institute, Blue Spring State Park, Save the Manatee Club, and Volusia County was able to safely capture Una and her calf on February 24, 2020, and transported them to SeaWorld Orlando for rehabilitation. While at SeaWorld, Una received the expert care she needed, and both she and the calf, named “Maguna” by SeaWorld staff, were returned to Blue Spring on September 2, 2020. A big thank you to everyone who helped! (All activities conducted under permit #MA770191.)

You can adopt Una or other manatees!
Each person who adopts her will receive a full-color photo, biography, and adoption certificate, as well as a membership handbook and subscription to The Manatee Zone, a newsletter featuring updates on the adopted manatees when they are sighted, and Paddle Tales, Save the Manatee Club’s bi-monthly eNewsletter.
Adopt for Myself Adopt for Someone Else Educator Adoption
For more information or to view other manatees available for adoption, visit the Adopt-A-Manatee page, or call 1-800-432-JOIN (5646).

Entanglement is a Drag for Manatees and Other Wildlife

Debris in waterways, such as discarded fishing line and hooks, plastic six-pack holders, and plastic bags, is dangerous to manatees and other wildlife. Manatees can become entangled in monofilament fishing line while they feed. They accidentally swallow the line or get it tangled around their flippers. Hooks can become embedded in a manatee’s lips, mouth, throat, stomach, or intestine and can lead to fatal infections. Line entanglements can also lead to infection. Watch our video: Manatees and Entanglement and find out how you can help.

The “As” on Una are freeze brands, which are used when a manatee is being tracked and has no other identifying markings. 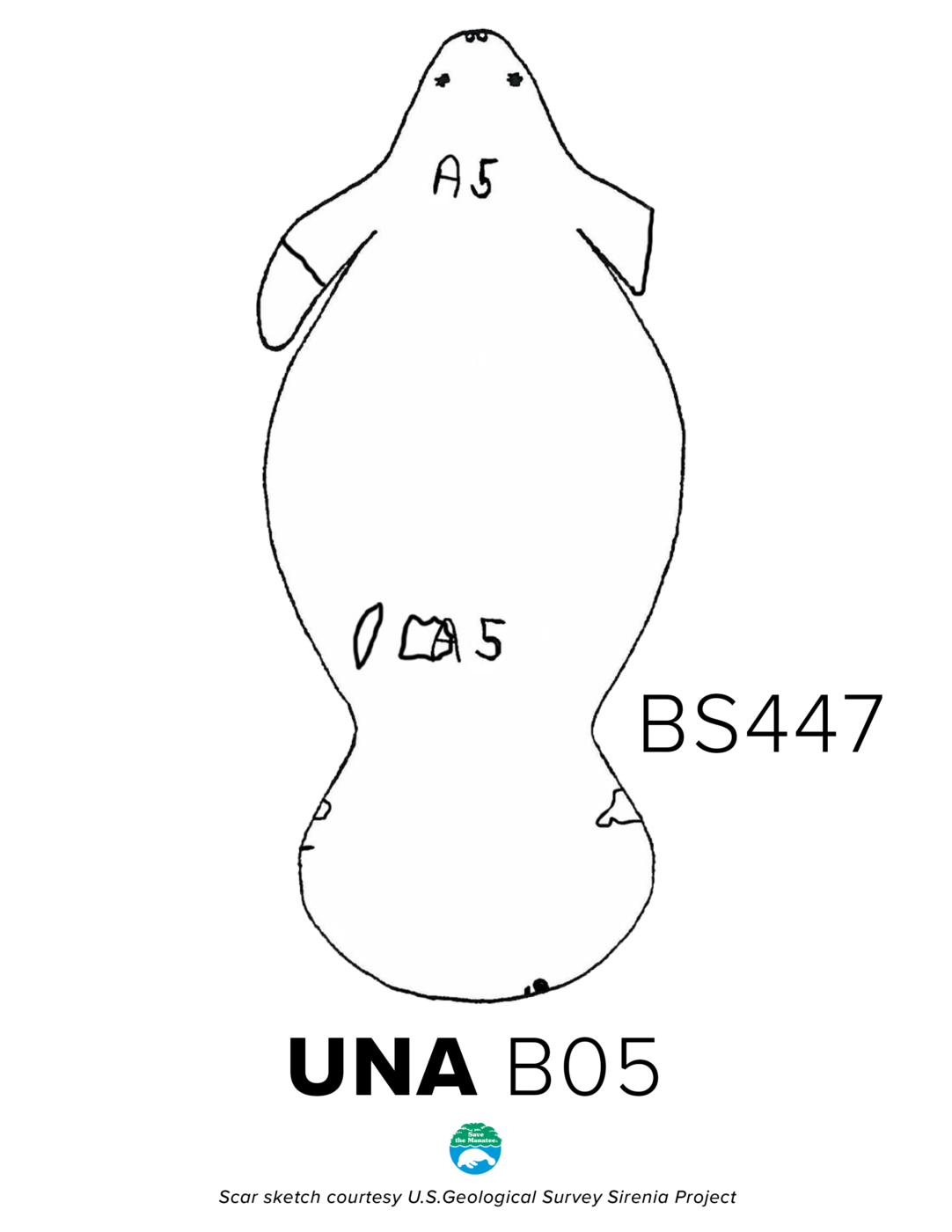 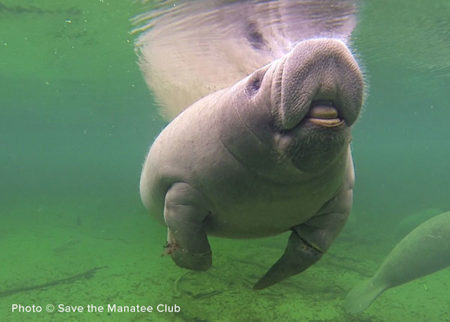 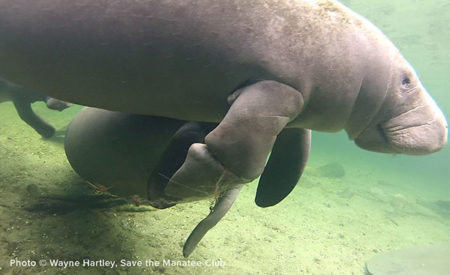 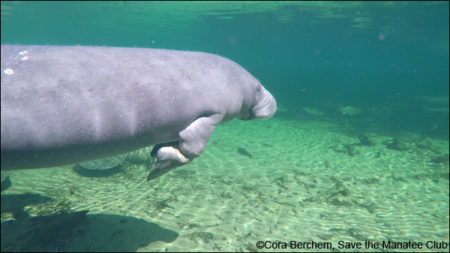 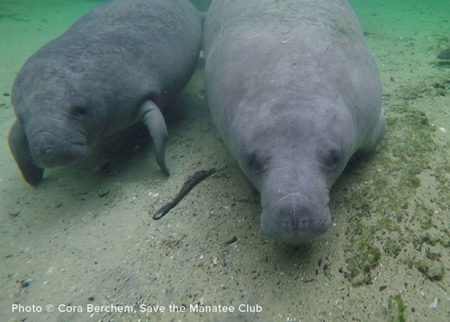 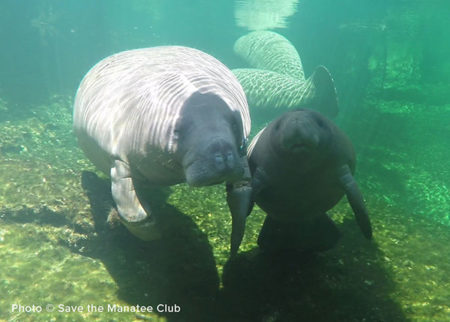 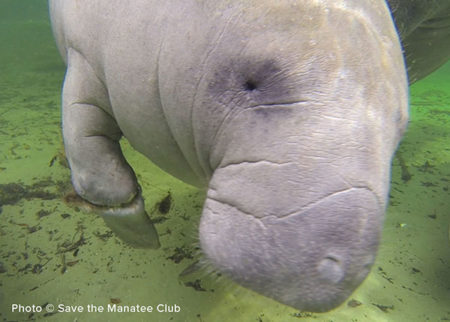 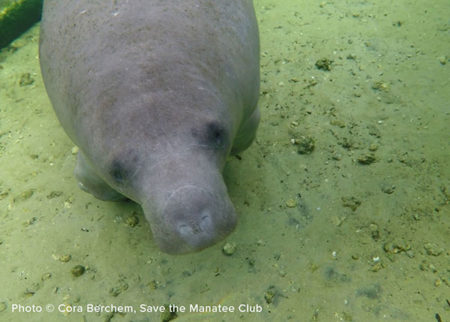 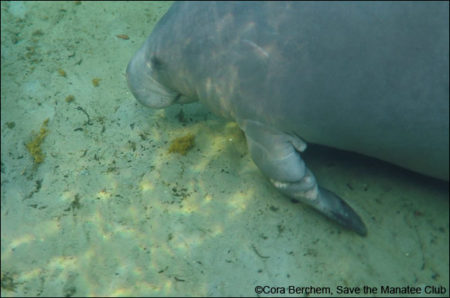 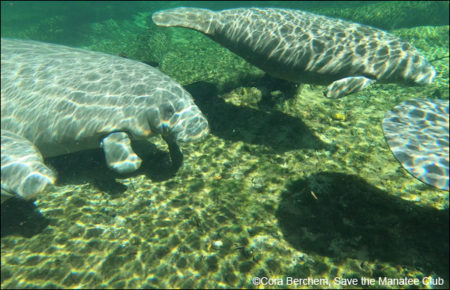 See a video documenting the release of Una and her calf Maguna. (Video © Cora Berchem, Save the Manatee Club.)

This video shows Una with line entanglement on one and then both flippers and also after the line was removed. Una’s flippers are scarred, but she is lucky that she can still use them. At 2:30 in the video, you can see her with one of her calves. (Video © Cora Berchem, Save the Manatee Club.)
Visit Save the Manatee Club’s YouTube page for more videos.